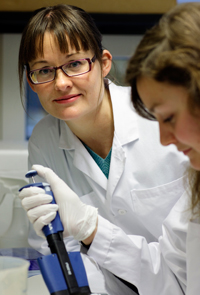 Lena Brundin, MD, PhD, studied medicine at Lund University, Sweden beginning in 1993. In 1997, she entered a PhD program in neurobiology, studying the immune responses toward intracerebral transplants in rodent models of Parkinson’s disease. After finishing her PhD in neurobiology in 2001, she went on to finish her medical degree in 2002. After a two-year internship in clinical medicine at Scania University Hospital, the largest university hospital in southern Sweden, she began residency in adult psychiatry.

During the first years of her residency, she performed post-doctoral studies on the roles of hypothalamic hormones in psychiatric disorders with professor Lil Traskman-Bendz, a world leading authority in the field of suicidology. After establishing her own research program, incorporating her interest in neuroinflammation with psychiatric disorders, she was awarded a clinical research fellowship and an innovation grant from the University Hospitalat the end of 2007. In 2009, she was awarded a position as a senior researcher in psychiatry from the Swedish Research Council. Her laboratory established the Psychoimmunology Unit, employing three post-doctoral researchers, two doctoral students and one technician, in addition to several undergraduate students. In the fall of 2010 she was named associate professor in experimental psychiatry, and in the fall of 2011 she became a clinical consultant in adult psychiatry.

Dr. Lena Brundin’s laboratory of behavioral medicine is working on the hypothesis that inflammation in the brain contributes to psychiatric symptoms. The group works in a translational fashion, spanning experiments in animal- and cell models to clinical studies in psychiatric patients. A particular clinical focus is on depression and suicidality.

Several publications from the group have shown evidence that inflammation, as measured by elevated cytokines and inflammatory metabolites in cerebrospinal fluid and plasma may serve as a biomarker in depressed and suicidal patients. In translational experiments, the group is trying to understand at a neurobiological level how the inflammatory substances exert their effects, and which regions in the brain are involved. The aim is to find novel therapeutic options for patients with depression, anxiety and suicidality.